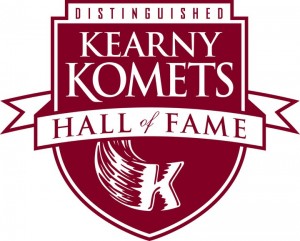 Jim graduated in 1969. He was a member of both the junior and varsity football squads. Jim graduated from the San Diego Police Academy in 1972. While a member of San Diego’s Finest, he was lead investigator on the highly publicized kidnapping and murder of 7 year old Danielle Van Dam, the murder of three SDSU professors, and worked with the FBI on the cross country killing spree of San Diegan Andrew Cunanan which ended in Florida with the murder of Gianni Versace. Jim has been a member of several law enforcement organizations both locally and statewide, past president of the California Homicide Investigators Association, and before his retirement served as Acting Assistant Chief. Captain Collins retired from the police department on October 1, 2011 after 41½ years of service, the longest in the history of the San Diego Police Department. Jim was also president of the Alumni Association from 1998 to 2006.

Under the leadership of Coach Bogle, Kearny’s Wrestling Team won back to back CIF Southern Section Championships in 1956 and 1957. Coach was recognized for his dedication to coaching with his induction into the Brietbard Hall of Champions in 1999.

Bill was a quarterback for the Komets during the mid-60’s and is considered the finest player in Kearny history. Bill was CIF Section Player of the Year in 1964. He was recently selected by the San Diego Hall of Champions as one of the top 50 high school football players in the history of San Diego High School Football. Bill graduated in 1966 with a full scholarship to UCLA. He was drafted by the Cincinnati Bengals in 1969. Bill currently resides in Los Angeles.

Tess, (Terry Tom) graduated in 1971.  From Kearny, Tess enrolled at and graduated from Stanford University. She went on to receive her medical degree from the University of California, San Francisco. Tess began her writing career while on maternity leave. Her first novel, Call after Midnight was published in 1987 followed by eight more novels. In 1993, “Adrift”, a screenplay airing as a CBS Movie of the week was written by Tess. From romantic suspense novels, Tess introduced her followers to medical thrillers with her 1996 release of Harvest. Her books have become international best sellers in 40 countries with more than 25 million copies having been sold around the world. Tess has won the Nero Wolfe Award for Vanish and Rita Award for The Surgeon. She is the creator of the Rizzoli and Isles novels which have become a TV series on the TNT Channel.

Linda graduated in 1962. While attending Kearny, she was Sophomore Class Secretary, a member of Quill and Scroll, Secretary of the Inter-Club Council, on the KHS News and Annual Staff, and Colonel of the Drill Units in her senior year. Linda has been the Alumni Association’s secretary since its inception in 1995. In recent years she has assumed the duties of treasurer and membership chair. Linda is dedicated to the school and its students, supporting all aspects of the Alumni Association and its fundraising efforts. An organization is only as strong as its people; Linda is the cornerstone of the Alumni Association, an unsung hero.

Drama and English teacher at Kearny from  1963 until his retirement in 1991. Mr. Winans remains active in the community by performing, directing, and serving on the boards of various theatre-related organizations. He is a board member with the San Diego Shakespeare Society. Mr. Winans has received the Atlas Award and been nominated for an Easties award. 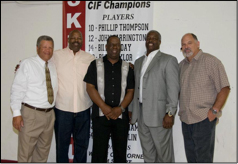 The end of the 1974 basketball season found Kearny with a perfect 32 and 0 record. The team is still considered one of the best teams in San Diego and statewide basketball history. Led by co-captains Mark Hoaglin and Donald Page, the starting team consisted of Rick Taylor and Phillip Thompson, the only junior on the team, as guards. The swing forwards were Rick Tompkins, Edwin Simpson, Bill Landay, and John Farrington. The head coach was Wayne Colburne.  Strategist and assistant coach was the late Tim Short.

This message is only visible to admins.

Error: An access token is required to request this resource.
Type: OAuthException
Solution: See here for how to solve this error