You are here: Home / Scholarships

Congratulations to the recipients of the 2020 Tom Barnett Alumni Scholarship!!  And, thank you to all the Kearny alumni who have contributed to this fund, which has enabled us to donate nearly $120,000 to 120 students since its’ inception in 1996!! As you begin to read a little about each of the winners, you’ll see all of the recipients, as well as those that did not receive the scholarship, are highly gifted and we are proud they are part of the Komet family!  Once a Komet always a Komet!!

Carla Alarcio (EID) has been on the principal’s honor roll all four years and graduated with a 4.37 GPA. She was recognized for “Excellence in Chemistry” in her Junior year.  For her Senior Gala Project, Carla designed and machined attachable magnetic buttons for button-up shirts for a client diagnosed with Cerebral Palsy.  In the summer of 2019, she worked at a summer internship program where she tutored middle-school aged students in the construction, wiring, and programming of VEX Robotics kits to compete in an obstacle challenge. Carla is also proud of her contributions to organizing and executing student events as the Kearny’s Associated Student Body Secretary in the 2019 Fall Semester.   Carla will be continuing her education at the University of California, San Diego where she will pursue a bachelor’s degree in Mechanical Engineering.  She also plans to educate herself in our history, our government, and our socioeconomic issues. As a citizen, she wants to be as informed as possible when making decisions, especially political ones. The knowledge she has obtained through her sociology and macroeconomics classes have shown her that the world is more complex than anticipated and sometimes even harder to comprehend.

Lien Duong (BST) believes very strongly in this quote from John Kennedy: “Efforts and courage are not enough without purpose and direction”.  Lien migrated to the United States with her father from Vietnam, when she was only 9 years old.  She went from barely speaking English to graduating with a GPA of 4.24!  Besides school, Lien volunteers at a local Buddhist group teaching kids the basics of the Vietnamese language so they don’t lose knowledge of their birthright language.  She also volunteers her time at Sharp Mary Birch as a desk concierge as well as assisting the nurses.  It is this work that has motivated her to major in Nursing at Grand Canyon University.  Lien said, “I don’t want a job, I desire for a career where I can make a difference in someone’s life and pass on my knowledge. Relating back to President Kennedy, I can have all the effort but without a purpose, my actions mean nothing. I am well aware of my abilities and realized that experiences do not shape who you are as a person, it’s what you learned and how you worked through it”.

Jaime Cabrera Guzman (SCC) would like to pursue a career as a Software Engineer and has been accepted to the University of California, Berkeley!  Jaime was a member of 6 clubs at Kearny including the California Scholarship Federation (CSF), the Flower & Crafts club where he’s the historian and public relations officer, the Multicultural Film Club, the Hispanic and Latino Student Union (HLSU) and the Circle of Friends, where he worked with students with disabilities.  Jaime is also the 2020 Senior Class Vice-President!  Jaime has maintained excellent grades, graduating in the top 5% of his class with a 4.44 GPA and has been on the Principals Honor roll all four years at Kearny!  According to his Honors English teacher, Beth Smith, “His maturity, thoughtfulness, determination, and generosity are qualities that aren’t visible on his outstanding transcript or in his excellent test scores, yet these are the qualities that make Jaime an exceptional young man”.

Wilmer Cabrera Guzman (DMD) is the elected ASB Vice President and has taken advantage of every opportunity to make a difference, not just on campus but within his community, including organizing blood drives and their annual Pasta for Patients fundraiser.  Wilmer was also a Student Ambassador on campus and the Yearbook Editor-in-Chief.  Wilmer graduated with a 4.34 GPA.  During the summer of 2019, Wilmer was given the opportunity to participate in the Law for Youth program at USD School of Law.  As attorneys and law students shared their experiences, he was given a unique view of the legal field, which was instrumental in affirming his desire to attend law school.  As an aspiring lawyer, he feels inclined to use his voice to fight for social justice and lead the lives of marginalized communities in San Diego towards legal and social equality.  Like his twin brother, Jaime, Wilmer plans to attend the University of California, Berkeley majoring in Political Science before moving on to earn his Juris Doctorate.

James Nguyen (BST) has been an honors student all four years at Kearny.  He has been actively engaged in various school clubs oriented towards academics, community service, leadership development and service.  These included Circle of Friends, Colorguard Team, Army Junior Reserve Officer Training Corps (JROTC), Class Cabinet of 2020, Keyclub and more! James was selected as the Kearny JROTC’s Battalion Commander, where he used his knowledge and expertise to make a difference in each cadet’s lives.  James graduated 8th in his class with a 4.15 GPA and plans to attend the University of California, Berkeley.

Christina Tran (BST) has a GPA of 4.32, which includes thirty-two college units, and is the valedictorian of her class!  She volunteered at the Serra Mesa library as a tutor and was a member of the CSF and the secretary of Kearny’s Key Club.  She was the Battalion S-1 Personnel Officer and Interim Battalion S-5 Public Affairs Officer during her junior year and the Battalion Executive Officer for the JROTC in her senior year.  Christina was part of the Project Lead the Way (PLTW) Biomedical Pathway and was able to expand her horizons and develop a background in biological sciences and patient care.  This also led her to participate in the FACES for the Future Coalition internship at Rady Children’s Hospital.  Christina was involved in two major automobile collisions at the age of five and nine which gave her firsthand experience with healthcare providers.  It was thru these experiences that she discovered she wanted to provide high-quality, compassionate care that saves lives!  Christina’s ultimate goal is to become a physician and will begin her undergraduate career in Human Biology at the University of California, San Diego.

Iris Zamora (DMD) graduated from Kearny with a GPA of 4.29 and eventually plans to attend medical school to receive her Doctor of Medicine degree, specializing in Dermatology as she is most fascinated by the largest organ in the human body, skin!  In her sophomore year, due to health reasons, she was forced to leave school for several months.  Once back at school, she worked hard, demonstrating a great deal of courage and willingness to get back on track and maintain straight A’s!!  Iris participated in a research study at the Scripps Institution of Oceanography of the effects of climate change on the health of coral reefs.  She created print media and crafted a PSA about the damaging effect of CO2 levels, which were showcased at the Birch Aquarium and at a multi-cultural fair she volunteers at thru her church, which is a second home for her, in Linda Vista.  Her dream school is the University of California, Davis and hopes to get there soon! 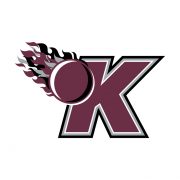 The Kearny High School Alumni Association Tom Barnett Scholarship is available for any Senior graduating from Stephen Watts Kearny High School who plans to attend an accredited four-year institution, community college, trade or vocational institution. Applicants must have a 2.5 grade point average and a 3.0 citizenship average. The deadline for applying for this year’s scholarship is April 11, 2020.

The scholarship application and the supporting documents must be received by the selection committee by April 11, 2020. Late applications will not be considered. 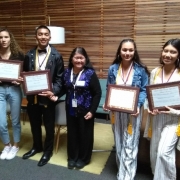 Among other goals, the focal point of the KHS Alumni Association’s fundraising efforts each year is to help provide scholarships to the next generation of up-and-coming Komets as they further their educations beyond the gates of Kearny High.  The KHSAA has been awarding scholarships to Kearny students for over 20 years.

On behalf of the Alumni Association, Laurie Quitugua and Mike George attended the Senior Dinners to present the scholarship checks to the students, and Ginger Chasteene recognized the DMD recipients at their assembly.

Congratulations to the scholarship winners!  Here’s hoping they succeed in their endeavors in their chosen fields.  Their work has just begun.

When this happens, it's usually because the owner only shared it with a small group of people, changed who can see it or it's been deleted.
View on Facebook
· Share

We are very happy to announce that the Hall of Fame Ceremony has been scheduled for April 23, 2022!!!! We had to postpone due to COVID, but we are ready to finally celebrate all the amazing inductees!! This year's event will be held in the gymnasium on campus - ticket sales are now open!! www.eventbrite.com/e/2022-kearny-hall-of-fame-ceremony-dinner-tickets-177588932277 ... See MoreSee Less

We are pleased to present, after a two year postponement, our annual ceremony to induct the newest members into the Kearny Hall of Fame.
View on Facebook
· Share

Homecoming weekend comes to a close with a very fun Potluck Picnic! We were surprised so many showed up in the heat!! Unfortunately the Komets were defeated at the Friday game, but they're a young team, so here's to 2022!!! Hope to see you all then!! GO KOMETS!! ... See MoreSee Less
View on Facebook
· Share