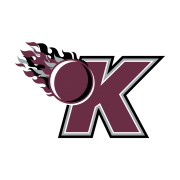 Fans of all ages—students, alumni and families—gathered at Komet Stadium on Friday the 13th of November for Kearny’s first-round playoff game against El Cajon Valley.  But the only bad omen was for the visiting Braves, as the Komets prevailed, 28-12, to advance to the second round.  A tough defensive battle gave way in the second half of the game as Kearny exploded offensively to pull ahead.  Senior QB Takoda “T.K.” Browne passed for 136 yards and two touchdowns and ran for two more en route to the win.

The contest was historic on more than one note—not only was it the first postseason game ever played in the new stadium on campus in its inaugural season, but it was also Kearny’s first playoff win in the 21st century.  Their last previous playoff success had been experienced way back in 1998, the same year some of Kearny’s current students were born.

The victory continued a remarkable turnaround for KHS football, as the team went winless at 0-10 in 2014 and started off slowly this season—including an early loss to this same Braves team–before piling up wins.

This game also marked the Komets’ first playoff appearance since 2011; only a week earlier, Will Gray was honored as prep coach of the week by KUSI in his first season as head football coach at Kearny.

Want to join the discussion?
Feel free to contribute!